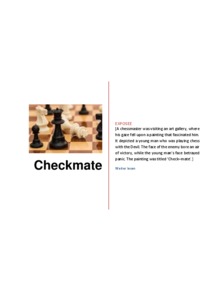 A chessmaster was visiting an art gallery, where his gaze fell upon a painting that fascinated him. It depicted a young man who was playing chess with the Devil. The face of the enemy bore an air of victory, while the young man’s face betrayed panic. The painting was titled ‘Check­mate’.

The chessmaster brought a chessboard and chess pieces with him. He set the board up just like the artist had portrayed it in his painting, and said:

“Something is not right about your painting.”

When the artist enquired as to what that might be, the chessmaster said:

“You’ve called your painting ‘Checkmate’, but that assumes that the young man has no more moves left to make.”

The champion moved the young man’s king to another square and said:

“Now the Devil is checkmated.”

Then he looked at the young man in the picture and said to him:

“Young man, your Enemy has made a fatal miscalculation. You don’t have to lose. You win.”

The situation depicted resembles that of our Lord Jesus. As He died on the Cross, it seemed as if through His death he had now been check­mated. But Jesus had another move: He rose on the third day! With that, Jesus irrevocably checkmated the Devil. Since the Resurrection of Je­sus, this applies: