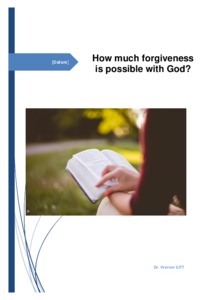 How much forgiveness is possible with God?

How much forgiveness is possible with God?

During a lecture, a woman interrupted me with the question: “Can some­one who has murdered 1,000 others be forgiven?” From the tone of her voice, it was already clear to me that it was a loaded question.

So I replied: “In your view, where would you say the limit of forgiveness should be? Should it be set at one murder, or three; or 50 maybe, or 100—or if not that, where then?” She didn’t make any response to that, so I continued:

“After all, Jesus clearly said, ‘I came not to call the righteous, but sin­ners’ (Matthew 9:13). And a murderer is undoubtedly a sinner. Jesus has set no boundaries to his power to forgive. So even someone who has murdered 1,000 can be forgiven, if they regret it from the heart and ask Jesus for forgiveness.”

At this the woman was clearly appalled and added: “Then I don’t want to be in Heaven, if such people are going to be there!”

“Yes, one can say even now: In Heaven there will only be sinners, and very particular ones at that—namely, pardoned sinners. If that weren’t so, you and I would have no chance of getting there. Our belonging to Jesus, and the surrendering of our guilt beneath His Cross makes all who believe in Him free from all sin.

“If you don’t want to go to Heaven, then you need to know of the only al­ternative, namely Hell. There is no third option. In that place, there will be all the murderers of history, who are guilty of the murders of not only 1,000 people, but even millions, and who have not sought forgiveness.

“But in Hell there will also be all of those who have never murdered a single person, yet have likewise never repented. Decide correctly, so that you might not end up in a place where you will be eternally lament­ing, because in your earthly lifetime you made the wrong decision!”

“Come now, let us reason together, says the Lord: though your sins are like scarlet, they shall be as white as snow; though they are red like crimson, they shall become like wool.”

Here we see clearly that God’s power of forgiveness knows no limits.